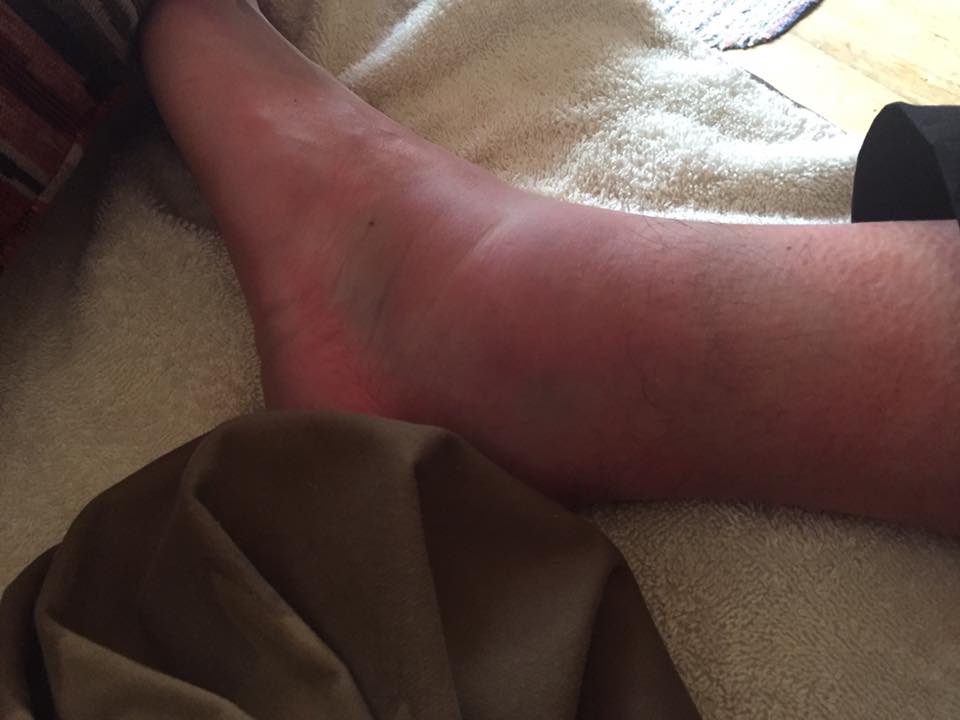 On Christmas Day I was almost home from my hilly 8 miles off-road run where the ground was covered in leaves so I didn’t see a stone under them so I went over my left ankle with a horrible crack. Having had previous ankle breaks when I was younger, five in my right and one one on my left I feared the worst. I hobbled the last 300 meters home had a shower and headed to A&E in Raigmore Hospital where I was born. A&E was very quiet, I expect not many folk want to be in A&E on Christmas Day. I was taken very quickly and after the Doctor inspected my ankle I was sent for a X-ray due to the severe swelling on it, sitting in the X-ray department the worst things were going through my head, I knew there was only 74 days till the start of the 350 miles 6633 Arctic Ultra Marathon and I knew if it was broken I wouldn’t be returning to try and finish unfinished business in 2017. X-ray results were quick and after the Doctor inspecting them she went away to get a second opinion from the Orthopaedic Doctor who was on that day. He was satisfied it wasn’t broken and because I could put weight on it I was sent home for my Christmas dinner a relieved person.
On the 28th of December my friend David Brandie who is head of the Scottish Institute of Sports Physiotherapy came around to my house to give some treatment, exercises and general advice. I have since managed to march to work and back twice which is just over 6 miles each day and this morning I did 8.6 miles marching with out too much discomfort so very pleased considering it only happened just over a week ago.
Next up for me was I was going to be doing West Highland Way then straight into Great Glen Way in the middle of January with my good friend Alasdair MacDougal aka Doug but the very rough section along the shores of Loch Lomond which we would have been doing during the night so instead we’ve decided to leave our home city Inverness and do the Great Glen Way in both directions which will give a total of 144 miles and 14,000 feet of ascending, I am familiar with the return leg from Fort William as I came 3rd in the Great Glen Ultra in 2014. This will be my last big preparation before heading back to the Arctic in March.