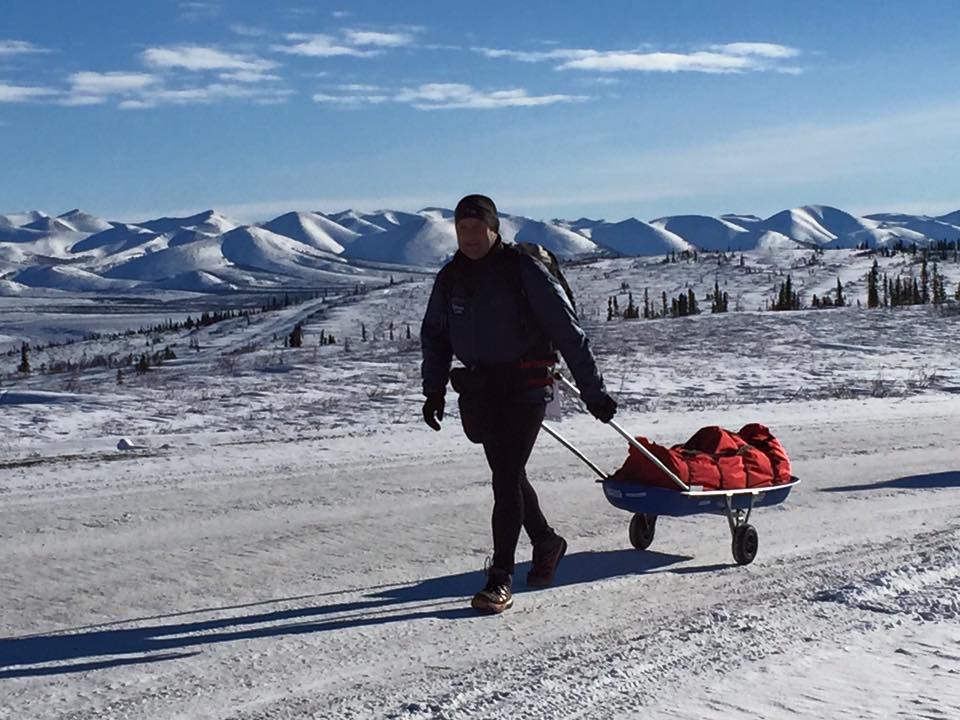 Wasn’t planning writing a blog about my attempt in the 352 miles 6633 Arctic Ultra Marathon as I felt I let people down, due to popular demand here is my story of my experience.

After the epic journey via Aberdeen, Heathrow and Vancouver I arrived in Whitehorse airport in the evening, waiting for my luggage to arrive was always going to have added nerves to the importance of my kit for the race. I couldn’t believe it when my bag containing all my compulsory race kit didn’t arrive. Martin the race organiser ensured me that it happens all the time and not to worry as we have four days for it to arrive. I filled out the missing luggage forms and headed of to our hotel. Next day we visited the airport for any update, my bag hadn’t arrived again. I was now very concerned and couldn’t sleep at night worrying that I wouldn’t be able to take part without it. Next day same thing, no bag. It turned out after some detective work from a Air Canada employee Anthony at the airport that my bag had lost its label at Heathrow airport. Anthony worked on after his shift to ensure my bag was put on the next flight to Canada. His generosity in sorting this out meant so much to me I bought him a thank you card and put $50 in it for his work. Unfortunately the morning the rest of the athletes were heading to Dawson Creak I still didn’t have my bag, I hadn’t been sleeping to well with worry and I had my first cold sore since been diagnosed with type 1 diabetes due to stress. Kevin one of the race organisers said he would wait with me till the late flight came in to hopefully collect my bag and drive up to Dawson to catch up with everyone. We went to the airport and went to watch the bags coming of the plane, there it was to much relief, we did a dance and got on our long drive to Dawson. On the way we seen a family of Lynx crossing the road in front of us.

We arrived at the hotel late in the evening, the hotel is World famous for its sour toe cocktails which has a real women’s toe in it, all the other athletes had to take one as its a tradition, fortunately for me and Kev the guy to makes this traditional cocktail had left. That was the only blessing having to wait four days for my bag.

Next morning we headed to Eagle Plains which is where the race starts. After another long drive we arrived to do final kit preparations for the race start at 9am next day.

The morning of the race I’m on the start line and did a head count, 13 fellow competitors, great I thought, that’s my lucky number. 9am and we are off, I ended up doing the stage to the first checkpoint at Arctic Circle with Tony, as we descended to the checkpoint I took a flyer on the ice, no problems but was gutted I trashed my Armadillo Merino wool gloves. I had two more pairs but would have to be more careful from now on.

After a quick top up of my Camelbak bladder I said buy to Tony who decided to take refuge in Josh’s very luxurious heated trailer to cook a meal. I finally arrived at the unofficial checkpoint lying in second place so decided to take advantage of the log cabin to grab a few hours sleep.

After a few hours kip, more than most of the others as most had headed off I set of and slowly made my way back through the field, as I approached the mountain the winds severely got up to the stage I thought my pulk was going to get blown off the road. After 23 miles I approached the next checkpoint which was a big truck yard. I had 2 hours sleep and headed of with PJ at midday for another 47 miles to the finish of the 120 miles race and checkpoint at Fort MacPherson. We were covering the ground well until we got 10 miles from the checkpoint PJ said he was tired and decided to sleep, I had my race head on and decided to crack on. This was a major error on my behalf as a few miles later I was convinced I was on the wrong road so started going back and fourth on the road looking for the school hall which was the checkpoint, six hours later the three musketeers, Frank, Alex and Hully caught me going in the opposite direction, I proceeded for a few miles with them and convinced them we were going the wrong way so we all turned. They eventually seen sense and turned, tiredness, fatigue and stubbornness I disagreed with them and cracked on in the wrong direction to eventually meat PJ who was fresh having had a few hours sleep, I on the other hand had thrown in at least an extra 20 miles and was looking at a daily total of 90+ miles. PJ asked me where I was going, I said to the checkpoint, he said I’ve done this race before and know the checkpoint is this way. I trailed behind PJ with very weary tired legs struggling to keep up with a fresher PJ who had a spring in his step. Finally made it convinced that the side of the road had one massive stretch of fish tank, it was only on the drive back after the race I realised it didn’t exist.

Next day a Ice road trucker stopped me and asked if he could take a photo, he then asked where I’d come from and was going, I said Eagle Plain to Tuctoyaktuk to which he replied and they call us f__king crazy. The night of day three and I’m six hours from check point and it goes pair shaped. Jonny Davies the medic gets worried and comes out knowing I should be closer to the check point, I am convinced Jonny is the head of SAS recruitment and he’s putting me through my final training, I phoned the MOD twice to say I’d seen 20 land mine bombs in the snow and to say area was high alert. I then had my two friends Ewan MacDonald and Ross MacDonald who had invented a treadmill which was built into pavements for folk doing their fitness waiting for their bus, well they exported them to the final miles of this stage so I wasn’t actually moving, as much as I shouted at them they wouldn’t switch them off. Finally Jonny seen me climbing the snow bank trying to rescue a cat. I was then convinced that I need to change platform in a train station. I didn’t have a phone with me and there is obviously no trains there but I was convinced this was all true. It took me 4 hours to do my final 3 km’s and I eventually got into my sleeping bag proud I’d made the cut for the SAS and was convinced I was getting a rest day next day for my extreme efforts. Although all this was going on I still had the sense to check my blood glucose levels. Unfortunately I didn’t get a rest day and was back on the road after a few hours kip disappointed the SAS put me through that for nothing.

10 miles into next day and I finished my fluid so stopped to fill up my 3 litre Camelbak bladder, put it back into backpack and put it back on only to realise I hadn’t put the top on correctly and the 3 litres poured all over me. This was seriously dangerous and luckily for me Kev pulled up as this happened and quickly decided to mark my position on the road and take me back to the checkpoint to dry all my kit. This was more time lost due to human error on my behalf. My back really started to cause me pain as my two wheeled pulk was bobbing, I eventually started pulling it with my arms to try and ease the pain from my back. I eventually got tendinitis in my left forearm from doing this. I got into my bivvi bag for a rest and a Northern Territories trick pulled up and asked if I was ok, I said I was just having a rest, he then asked where I was from, I said Scotland, which part he replied, Inverness I said, no way he said one of my relations has just moved from Stornaway to Inverness, it’s a small World.

Next day I flew along to the checkpoint despite my feet been in tatters with blisters, the final one before hitting the actual Ice road for the remainder of the race. I ended up getting frostbite on my nose which Jonny treated before I put my head down. He asked me when I wanted woken up which I said 3am to make a early start to Swimming point the final checkpoint before the finish. I was struggling with my back and fallen behind the others due to various reasons to decided to pull the pin short of the checkpoint gutted that I’d not completed what was to be my final race and your only as good as your last race.