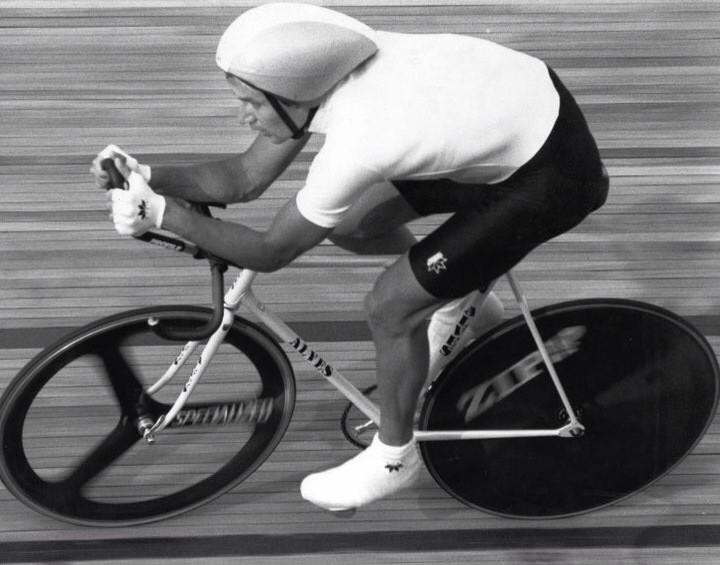 Until being diagnosed with diabetes my sporting background was mainly cycling. I had done the London Marathon and the Highland Cross bike/run duathlon (winning this in 1997), but my first love was cycle racing.

I started racing when I was 13, having taken part in my first club run on my BMX. Progressing to 10-mile time trials with the Clachnacuddin Cycling Club near my home in Inverness, I began doing schoolboy road races, but I was small for my age and found them difficult. In fact, I got an absolute kicking. It was only in my final year as a junior that I started competing, finishing third in the Scottish junior road race and second in the road race Best All Rounder.

As a senior I found that a lot of the guys who’d beaten me as a junior gave up.

But I stuck at it, travelling from home in Inverness, often making seven- or eight-hour round trips, to race in Scotland, then embarking on even longer journeys to compete in England. I was selected for Scotland for the first time in 1989, and the following year I had my biggest wins so far – a stage of the Girvan Three-Day at Easter, and then a stage of the legendary FBD Milk Ras, the nine-day race in Ireland, ahead of Patrick Jonker, an Australian who went on to a successful professional career.

I found that I loved stage racing, and relished testing myself against some of the best riders in the world. One of the performances that gives me most pride is 9th overall in the 1993 Ruban Granitier, a brutal race in Brittany, where I was also third on a stage, ahead of Jeroen Blijlevens, a Dutchman who went on to win four stages of the Tour de France.

One of the things that helped me in stage races was my ability to recover. When others started tiring I found that I felt stronger. I remember standing on the start line of the Ruban Grainitier one morning, four or five days into the race, and taking my pulse. I was amazed: it was 38.

But the other thing I loved, as I mentioned at the start, was fixing my sights on a big goal.

In 1994 it was the Commonwealth Games, by which time I was training in a completely different way. I had been inspired by reading about the scientific training Chris Boardman, the 1992 Olympic pursuit champion, had been doing with his coach, Peter Keen. And I started working with a sports scientist, Richard Davidson, who had grown up nearby, on the Black Isle.

Working with Richard meant training less but more intelligently. The volume was slashed. I went from training 16 hours a week to just 8 or 9 hours. But a lot of my old training had just been wearing out my tyres. I emphasised quality rather than quantity: I trained less but much harder. I got a lot more out of myself. And, crucially, I had more recovery time.

This training served me well for the Commonwealth Games in Victoria, Canada – the first time the Games were open to professionals – where I finished 9th in the road race. The following year I needed a new target, and so I picked an unusual one – the Scottish hour record. It was held by none other than Graeme Obree, who had broken the world record in Norway in 1993, but it all came together on one of my toughest ever days on a bike, and I managed to beat Graeme’s record.

I retired in 1996 having finished 4th overall in the Ras for the second time, then came back in 2000. And when I wasn’t cycling, I was keeping fit, running the London Marathon and taking part in other events, including adventure races. I was completely unprepared for the news, when I was 40, that I had Type 1 Diabetes.