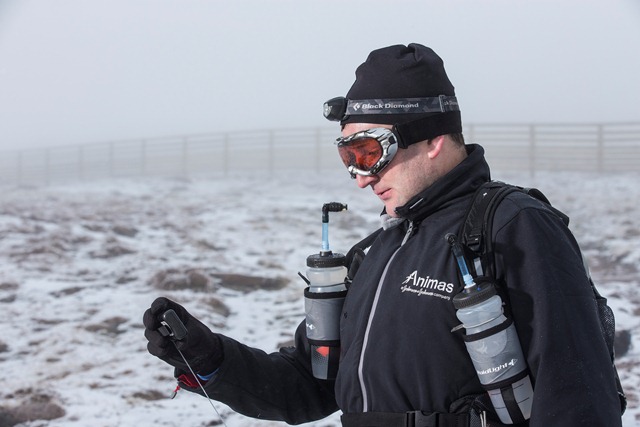 Last Tuesday (2 December) was a day of mixed emotions.

I had arranged to meet my training buddy Alasdair McDougall (Dougal) early in the morning at the Cairngorm ski car park for a 2 hours 30 minutes mountain run. Conditions were perfect for my training for the Ice Ultra with clear blue skies and the mountain weather forecast was to be -12 on the summits with severe wind-chill also. We left the car park fully kitted out for all eventualities that may occur not wanting to have to call out the mountain rescue like happened to a runner last week who got lost while running in only shorts and a t-shirt.

The Cairngorms had its first real infestation of snow which made underfoot conditions hard going but great simulation for my upcoming Ice Ultra race. I had a Dexcom G4 continuous glucose (CGM) sensor attached to me which via Bluetooth sends a signal to my Animas Vibe insulin pump and gives me blood glucose (BG) levels although a slight real time delay (approx. 10-15minutes) but more importantly BG trend arrows. Although I had CGM I still stopped on a few occasions to do manual tests with my OneTouch BG meter, reason for this was to make sure my Armadillo Merino gloves were doing their job and I could have good circulation to get blood from my finger tips with my lancet to do a manual test. When myself and Dougal reached the summit conditions were very clear but with high winds and severe cold temperatures it wasn’t somewhere you’d want to stop for a picnic. With the first real test of 2014 in the cold complete for my clothing and diabetes kit with no issues for either I was a very happy bunny, I said my goodbye to Dougal and drove the 45 minutes’ drive back to Inverness with the heating full on in what was becoming a steamed up car. 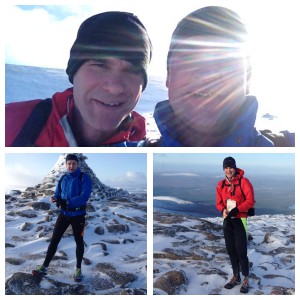 Later that day I received a phone call which made my day completely crumble, it was from the organisers of the Ice Ultra to say that due to lack of entries they have been left with no option but to cancel the 2015 race. I initially felt sick but now I fully respect and understand why this tough decision had to be made.

Now that dust has settled I’ve realised it’s just a minor blip in my quest to show that living with type 1 diabetes shouldn’t stop anyone achieving their goals and dreams. There are always going be set backs and knock backs in life, so rather than dwell on it, I’ve gone back to the drawing board and am more determined than ever. I have decided to run the 72 miles single day Great Glen Ultra  in July which finishes in my home city of Inverness with beautiful landscapes and views. As far as going and doing a severely cold multi day Ultra, I have an event in the pipeline for 2016 but for now let’s just say,”Watch this space”!